Hello. My name is John Faye. It’s very possible you’ve never heard of me.. unless you have, in which case, hello again! For those of you who don’t know who I am, I could suggest that you Google me, but I hate when people do that. Of course, if you were to Google me, you would find this website, JohnFaye.com, to be the top result, making me the #1 John Faye in the world. This does not now, nor has it ever, precluded many people from confusing me with the late folk guitarist John Fahey, which, I suppose, makes him the #2 John Faye in the world. 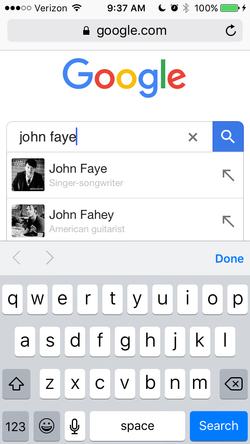 An acquaintance of mine recently sent me an enthused Facebook message that read: “I found this free at the Philly AIDS thrift store!” Attached was a photo of a booklet called Notes to: John Fahey’s ‘The Transfiguration of Blind Joe Death,’ a companion piece to an album Mr. Fahey put out the year before I was born. I don’t know what’s worse: that my acquaintance didn’t know my actual name, even though it was right there on Facebook, or that an item associated with what she thought was my name did not even warrant a price tag at a thrift store whose very existence is predicated on raising money to combat AIDS. 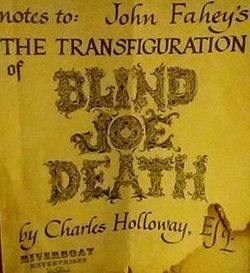 I shouldn’t be too hard on her. My own sister, Tae Im, who, I guess for the sake of this example, I’ll refer to as my "Korean half-sister," gave me a coffee table book of Irish surnames for Christmas one year, perhaps encouraging me to get more in touch with my Hibernian side, long-dormant since the loss of my father. “Faye” was nowhere within its pages.

“Yes, it is in there. It has all Irish names,” my sister insisted.

“I’m pretty sure it’s not in there,” I said. It was the first and only thing I looked for.

She wrestled the tome from my hands and began leafing through the F’s.

“Maybe it’s under McFaye,” I half-joked, having heard somewhere that Irish immigrants removed the “Mc’s” from their names, hoping to circumvent 19th century American hiring practices, when most job notices contained the stipulation “Irish need not apply.”

“Wait… ah-ha, see?” my sister said, scrolling down a page with her finger.

I gave up. That particular Christmas present never saw the light of another day, and is probably the primary reason why I’ve never owned a coffee table. Even the Book of Irish Names never heard of me.

Anyway, I could go into myriad other hyper-analytical reasons why I may not have made it onto your radar, but that would sound like sour grapes. And to be honest, I’m pretty happy to have what you might call a “cult following.” Without the cult though. That seems high maintenance. Actually, maybe even without the following. Well, how many is a “following,” really? That’s pretty subjective.

Below are some terms that might be helpful in letting you know a little bit about me. I could say they are in “no particular order,” but I hate when people say that. I guess it’s a claim that’s justified when someone puts you on the spot and asks you to divulge your favorite “desert island” albums or some other spontaneous list off the top of your head, but even then, it seems like less of a description of your thought process and more of a defense against being judged. I just generally don’t buy it. Maybe that makes me cynical. I’ll freely admit I spent the better part of an hour prioritizing this list and pondering the ideal spot for “occasional pants shitter.”

Anyway, this is me, in a particular order:

OK, with this non-comprehensive, highly mulled over list as your primer, please enjoy the rest of this website!